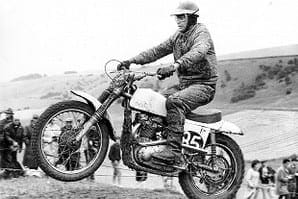 In a 14 year racing career the quietly spoken man from Hampshire was undoubtedly one of the most popular riders of his generation, and the sight and sound of Ivor and his big booming four-strokes will be long remembered by a legion of West Country fans.

He was one of a sextet of international class riders in the southern centre who managed to scoop a staggering eight centre championship titles. Ivor competed in all the big British national meetings; was a member of the 1962 inter centre championship winning team and a regular sight in the winter time TV meetings. He also spread his wings to mainland Europe during the 1960s.

He retired from racing at the end of the 1968 season but the memory of ‘Mr Smooth’ and his gleaming white Triumph Metisse will live forever.

Ivor is succeeded by his wife of 56 years Audrey, son – and an ex-Southern centre trials champion – Nick and his grandson Alex.