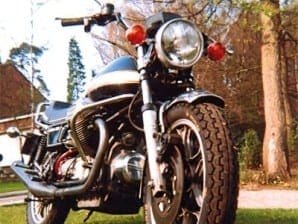 Here’s the story, streaked in unusual pastel colours through the rose-tinted spectacles of 30-plus years ago. It is perhaps rather poignant that it should be narrated by me, an Italian girl from Sicily – the arid triangle of land that lies beneath the ‘boot’. However, southern Italy does have a fascination for all the industrious businesses which blossom further north and Moto Guzzi’s history is not atypical.

The oldest European motorcycle manufacturer in continuous production since 1921, Moto Guzzi is one of seven brands owned by Piaggio. Established in Mandello del Lario, (northern) Italy, Moto Guzzi was pivotal to the booming Italian motorcycle industry, quickly gaining fame within worldwide racing. In fact, it was the first company to acquire and use a wind tunnel, as well as create the first V-eight-cylinder motorcycle engine.

I listen to the story unfolding and I try to remember what I know about Sicily’s growth in the 1920s and 30s. I cannot recall an eight-cylinder engine or even a four-cylinder unit being manufactured on the island. Indeed, a wind tunnel would have been as alien to the region as snow on its Mediterranean coast.

The test of time
As always, the immense economic gap in Italy between north and south is confirmed by history. Like most manufacturers that have survived the test of time, Moto Guzzi had its financial upheavals, gaining a string of owners of both the short and long-term variety.

Two First World War aircraft pilots and their mechanic, Carlo Guzzi, Giovanni Ravelli and Giorgio Parodi set Moto Guzzi up: Ravelli died days after the end of the war, in a plane crash, and his memory lives in the eagle’s wings of the Moto Guzzi logo.

The earliest bikes were known as GP (Guzzi-Parodi). Carlo’s first design, a single cylinder four-stroke, reigned supreme for 45 years. Through 1934, each engine bore had the signature of the mechanic who had built it. By 1935 Moto Guzzi was already famous in the UK, when it scored a double victory at the Isle of Man TT with rider Stanley Woods.

Fast-forward to the 1940s and Moto Guzzi was supplying high-performance engines to official racing teams with varying overhead cams and multi-valve cylinder heads.

After the Second World War, when Sicily was counting the cost of invasion and settlements, Moto Guzzi, with other northern Italian factories, led the world in Grand Prix racing in the 250cc and 350cc categories, winning five straight 350cc championships.

By 1957, Moto Guzzi had won a total of more than 3000 official races, but like many car makers, it pulled out of motorsport due to falling sales and the ever-increasing costs.

Ten years on, designer Giulio Cesare Carcano created the iconic V-twin engine; the comparatively simple V-twin, air-cooled, pushrod 700cc was originally designed for a competition sponsored by the Italian Polizia to power a new police bike and continued to be developed over the years to 1200cc.

In 1976 the brutal and beautiful 850 Le Mans came out, stimulating the imagination and desire of many a UK teenager, let alone Italian ones. One of the former, having trawled through the papers of the day, arranged a strange three-way swap with a couple of guys from the opposite ends of the UK. The bike being exchanged was an insane creation that had started out as a Kawasaki Mach 111 racer with lights attached, the other two, a Honda Goldwing and the Moto Guzzi whose owner’s story I’m listening to.

Challenge
The new Moto Guzzi owner and storyteller remembers wondering whether the guy who acquired his Mach 111 ever made it back; the fuel consumption, at about 8mpg, was a challenge in its own right.

The racer also had a single seat and a tailpiece, and the buyer had come accompanied by an extremely large friend who then had to sit on the flimsy tailpiece – back to Derby from Surrey.

The Motto Guzzi T3 was not, in fact, a standard T3. It had been fitted with a production racing 1000cc Le Mans motor, big Dell’Orto carbs K&Ns, wild cams and Lafranconi exhausts.

The scabby purple paint was changed immediately by the new owner to a more tasteful black-and-gold colour scheme.

On the surface it looked like a smart but normal T3, with the upright bars and an aftermarket seat, however it kept up well with other bikers’ Z1s and big two-stroke alternatives.

Off-the-mark acceleration may have been a little slower, but as soon as the clutch had bitten (at around 30mph) the old girl went off with a surge not unlike a falling elevator.

The Brembo brakes – a linked system utilising one front disc, with the rear responding to the applied foot brake and additional stopping supplied by the handlebar lever – were as good as any and pulled the heavy bike up smartly.

Handling was also very good, as you would expect from an Italian bike. However, the bike was no superleggera and needed to be treated accordingly. It was no commuter hack either, especially when threading one’s way through tight lines of traffic: one had to make sure the throttle would not be blipped for downshifting, or the engine’s torquey reaction would have had the rider bouncing off the nearside doors of enraged car owners.

But what does a callow 19-year-old British youth know? In the happy-go-lucky 1970s one spent more time posing around town with your mates and taking the girlfriend around than trying out the Guzzi on long runs.

Reliable
Happy memories indeed, of a comfortable ride, warm knees and a reliable bike which never broke down… though there is a sparkle in the narrator’s eyes when he recalls that he replaced the bike’s electrics with Yamaha switches.

Perhaps, even for a reserved and understated Brit, though a good bike the Moto Guzzi was a little too unglamorous. It was sold, eventually, to buy the next ‘project’, one with lots more Japanese chrome and cylinders.

I wonder briefly what the bike’s destiny would have been in its home country, and how many Moto Guzzis made their way down south in desperately poor Sicily?

Fewer than those destined to the UK market, I reckon.