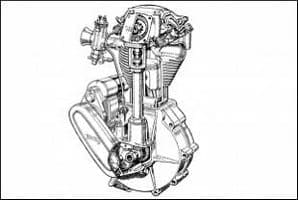 Launching in 1932, the International was available in 350cc and 500cc forms and joined two other ohc machines Norton already had, this in an age when even a pushrod overhead valve engine was considered sporting.

Though the previous engines had been powering the sporting range this job swiftly became the purpose of the International or ‘Inter’ engine. Though classed as a sporting machine it was fully road legal… though according to some biographers the unit was never happy with a silencer fitted and most owners removed them at the earliest opportunity. It may also seem odd when viewed from 2012 but the Inter engine also powered works ISDT machines, a job it did very well too. In those days there was much less specialisation in all sports.

Gradually the Inter engine was developed to produce more and more power and had the Second World War not intervened the ultimate development would have become the Manx Grand Prix model. This basic machine surfaced post Second World War as the Manx while the Inter became a sporty roadster.

From the start the ohc engine was fitted with exposed hairpin valve springs to combat overheating causing spring failure. There were dalliances with metals other than cast iron for the head and barrels before the Inter was quietly dropped from the range in 1958, though really the last models were 1957 ones which were left over.