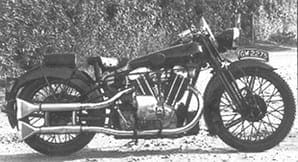 In the world of motorcycle auctions and dealing there are several facts potential bidders/collectors need to know.

First of all, the most desirable British motorcycles are pre-war V-twins with the most sought-after and collectable examples being Brough Superiors, something borne out by H&H’s world record price for such a machine at auction – an SS100 that realised £280,000. Low volume works bikes generally attract more interest than road machines and a good, proven history is always desirable.

A machine that fits all these criteria in bucket loads is the world-renowned ‘Old Bill’, which has featured in every book ever written about the incomparable Brough marque. It has been consigned by H&H for auction as part of the Roger Allen Collection at the company’s Duxford sale on October 4 this year and has an estimate of £250,000-270,000.

Though now known as Old Bill, it was originally referred to as ‘Spit and Polish’ due to its immaculate appearance and was manufactured in 1922 for the personal use of its charismatic founder George Brough.

Powered by a 1000cc side valve, V-twin engine, it made its debut at Brooklands, giving Brough his first win and becoming the first side valve machine to lap the Surrey track at over 100mph.

With George in the saddle, it went on to win no fewer than 51 sprints in the 1922/1923 seasons. And in the 52nd, at Clipstone, Nottinghamshire, it made fastest time of the day; even though bike and rider crossed the line separately! With Brough once more in hospital, ‘Old Bill’ was converted to road trim and sold to fund the factory’s wages.

During the Second World War the machine was damaged by a cast iron bath falling through a ceiling above where it was parked… In storage until the late 1950s, it was acquired by ‘Titch’ Allen who with the assistance of George Brough and ex-works manager Ike Webb, restored it to 1923 specification. George demonstrated it at Clipstone in 1959 and at Brighton Speed Trials and Brooklands by ‘Titch’ Allen.

Said George Beale, principal of H&H’s motorcycle department: “If I could bring any motorcycle in the world to auction, it would probably be this one – the combination of significance and provenance is simply unrivalled in my view. Clearly, the value has been difficult to estimate but, based on our success with the SS100 in 2010, there is no telling what it could make on the day.

“It is an absolute privilege to be handling the sale of such an automotive icon and we very much look forward to being able to show it to the world’s serious collectors from the Stafford show onwards.”

For further details of H&H’s classic motorcycle and sales log on to www.handh.co.uk