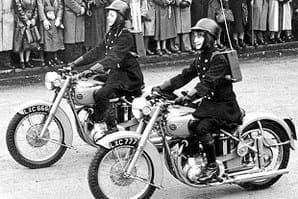 “Why the Flash?” your scribe asked, “and not the Ducati, Trident…?”

“It’s comfortable, fast enough and I trust it,” Peter replied. End of discussion.

When Bert Hopwood designed the ohv parallel twin cylinder A10, his brief from the factory board must have resembled Peter’s reasoning. And the fact that six decades on these 650cc pre-unit twins in the hands of selected riders still clock up huge mileages each year proves Mr Hopwood hit the spot.

While there had been earlier parallel twin cylinder motorcycles the origins of the ‘modern’ British parallel twin date back to the 1933 647cc Triumph 6/1 designed by Val Page. In the motorcycle industry merry-go-round Page later moved to BSA and Edward Turner took over development of Triumph’s twin cylinder range. While at BSA Page designed, before the Second World War, parallel twins for the Small Heath factory, one version even sported ohc valve operation, Turner was briefly at BSA during the war and doubtless added his ‘six pennorth’ before Herbert Perkins oversaw the project into production as the ohv 495cc A7 offered to the market in September 1946.

Launched in autumn 1949 as a direct challenge to Triumph’s 650cc Thunderbird, Hopwood’s new A10 followed established BSA twin format but was engineered to make an even tougher engine. Obvious external changes to the established A7 included complete revision of rocker gear, rocker box and fitment, although the single rear camshaft remained gear driven and external fitments such as the timing chest case look similar to the earlier twin – almost nothing is interchangeable, as countless restorers of the so-called Perkins A7 have discovered.

Named the Golden Flash – not Gold Flash, or Flash as many of us enthusiasts call them, it took centre stage on the BSA stand at the 1949 Earl’s Court Show priced at £193 including purchase tax in rigid form with the option of plunger rear suspension for a further £12. Its engine pumping out a factory claimed 34-35bhp, great play was made of sustained high speed touring potential and not missing a trick BSA pointed out the Flash’s suitability as a sidecar machine.

Considering BSA’s hype was, or rather is, Hopwood’s A10 that good? In a word, yes. From the box the new ‘Beesa’ hit an easy 95mph rider upright and was, for the period, quick through the gears. Despite odd patches of minor vibration at certain revs the engine was considered smooth and BSA’s own gearbox remains to this day a joy to use.

Although the rigid framed option was dropped after a couple of seasons the plunger rear suspension model remained listed until 1957 while the new swing arm frame was introduced in autumn 1953 for the following season. Aimed only at the export market (predominantly American) a 105/110mph sports version of the Flash appeared for 1953 joined a year later by the similarly tuned Road Rocket. For 1958 the sporting Super Rocket was unveiled and finally following the private development work of BSA Gold Star Specialist Eddie Dow the factory launched its ‘cafe racer’ version, dubbed the ‘Rocket Gold Star’ for the 1962 season. Additionally models were built for specific export markets such as the A10 Rocket Scrambler and later Spitfire for US buyers.

Apart from its hernia-inducing centrestand the A10 remains a good choice for high mileage classic enthusiasts with some up-rating the 6v electrics to 12v and fitting indicators to suit modern road conditions.