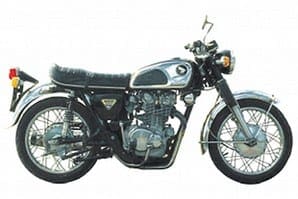 Originally nicknamed The Black Bomber, the Honda CB450 stood convention on its head, gave it a slap and made it wake up and smell the coffee. This is the machine that proved unequivocally that the Japanese were not limited to small bikes. The establishment was so worried about the bike’s potential abilities that it was initially banned from competition. With valves controlled by torsion bars, double overhead cams and an electric start this was serious technology aimed at the best of British.

It was a class act back in its day and even now the CB450 makes a stunning riding machine. At low revs there’s enough going on beneath the tank to let you know what’s happening. You’re in no doubt that this is a big four-stroke twin but as the revs rise the 180º motor smooths out in a way you’d hardly credit. At 6000rpm it’s getting into its stride and at 8000rpm the bike is running smoother than any classic parallel twin has a right to.

Some might suggest that 1960s Japanese bikes are no longer viable on modern roads; they obviously haven’t sampled Honda’s big twin. This is a Japanese classic from the golden period that you can still genuinely go touring on. It was built by Honda to do a job and will continue to do so, 40 years after the example was made.

And it gets even better – potential buyers are spoilt for choice. You could plump for an early four-speed example with the Norton-esque tank and combo instrument unit. Or possibly the later revised model with a five-speed box and more conventional clocks. Not sure about the TLS front brake? Then one of the later disc braked models from the early to mid-1970s might just fit the bill. If none of those float your boat, we’d suggest one of the out of left-field CL450s. Same engine and general layout but styled like a street scrambler; certainly a head turner. All and any are quintessential big twins; they also happen to be Japanese and packed full of character.