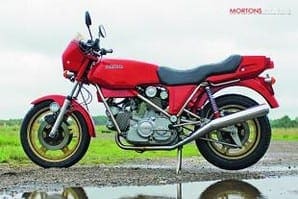 A ‘baton run’ has been organized to celebrate both milestones and the club wants to involve as many of its members and their bikes as possible.

It started in April on the south coast and the baton is steadily being passed from member to member in turn. It will reach Towcester and Daventry, where Hesketh motorcycles were developed and manufactured, in September.

A weekend rally will be held in Towcester and at 9am on Sunday, September 9, the town mayor will award the Lord Hesketh Trophy for best bike and wave off a group heading for the continent to see European members and complete the baton run.

After three difficult decades, the Hesketh motorcycle business now has a new lease of life under the ownership of Paul Sleeman.

Its new premises in Kingswood are open for business with new bikes being serviced and upgraded. Plans are afoot to restart production and the first new bike appeared earlier this year. To find out more about the Hesketh revival visit www.heskethmotorcycles.co.uk