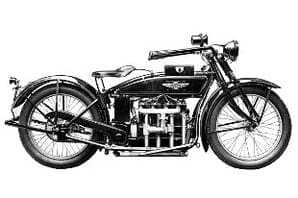 This is a bit of a challenge for you as, unlike other bikes in this series, I’ve no idea where you might get to try a Henderson. The American motorcycle industry was a massive concern with dozens of different makes at one time. The depression era and the Model T Ford helped whittle them down to just two by the 1950s then just one when Indian went. Before all that though the typical machine made in America  was of a fairly high and innovative specification with chain drive, electric lighting and multi cylinders.

Beginning in 1911, the Henderson Motorcycle Co was originally a Detroit based company formed by William and Tom Henderson to produce a four-cylinder motorcycle. Initially quite a long wheelbase machine, it was reduced to a more normal seeming 58in from 65in in 1915. The brothers followed a practice of refinement that kept their machines at the forefront of technology as multi gears, mechanical oiling and a kick-starter appeared in quick succession.

The public liked the bike, sales were good but by the time this 1924 model appeared the company had been sold to the owner of the Schwinn bicycle factory and moved to Chicago. Coincidentally Ignaz Schwinn also owned the American X machine and the two motorcycles complemented each other.

The four-cylinder Henderson proved a superb high speed machine and police forces placed large orders for what was nicknamed ‘the fast blue one’ no doubt a reflection on its colour and speed.