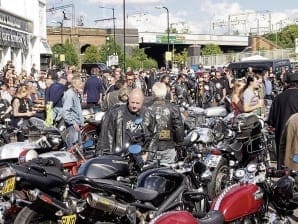 It attracted no fewer than 12,000 people, including many of the Ace’s original ‘ton-up’ customers, and the outstanding success of that event led him to believe that there was a future for the Ace as a venue and meeting place for motorcyclists.

After ownership of the building was acquired, the Ace became a mecca for motorcyclists the world over, and has now grown into a worldwide brand with franchises in several countries, including China.