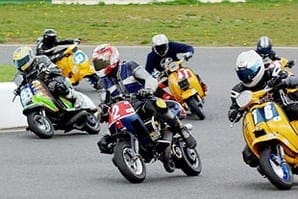 This was the 10th anniversary of the VMSC event and it was celebrated in style with more than 60 different class trophies presented on the day with the best vintage trophy going to Nigel Hetherington’s Lambretta TV200 Imperial (based on an Eddy Grimstead dealer special).

As well as the many individual show entries there were a number of club stands, including the Original Stingray Owners’ Club (Stingray scooters had considerable off-road competition success during the 1960s).

The ‘Stingray Specials’ were developed after Don Noys and Ray Collins joined forces to produce a limited number of off-road scooters. Their design was radical and consisted of cutting Lambretta 200cc crankcases, then rotating an adapted Zundapp Bella 200 cylinder head by 45 degrees to deflect the air cooling (at this point in time, ally welding was in its infancy, so this was considered quite a radical move). The engine was then fitted into a custom designed Stingray frame which incorporated Alf Hagon front forks and a Norton Jubilee rear swinging arm.

The Stingray bikes will be on display at a BATS ‘revival’ scooter scrambling event which takes place on the weekend of July 19-20 at The Essex Sports Village.