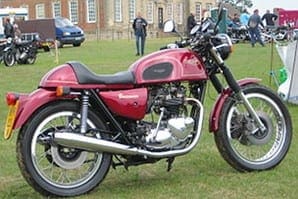 Organised in memory of VMCC founder Titch Allen, it boasted club stands galore, classic trials riding demonstrations by members of the Taverners and visiting Dabbers club, the arrival of John Wallis on his ‘red-nosed’ 1924 Brough Superior SS80 after his mammoth 3800 mile, month long tour of England, Scotland and Wales in support of Comic Relief and much more.

There were stories to be told on every stand: Mike Curtis had his wonderful collection of classic scramblers on show; Michael Wells had a trouble-free ride from Worcester, 67 miles away, on his immaculate 1937 Scott Flying Squirrel which hadn’t been out for 20 years; and an NSU as far removed from a Quickly as you could imagine – a 1943 Kettenrad half-track, painted in dunkelgelb (dark yellow) and one of more than 8000 examples designed to be transported to their wartime destination in Junkers 52 aircraft – was making its show debut.

It seems that every time you visit a big vintage event like this, another example of one of George Brough’s ‘secret machines’ comes out of the woodwork, and one exhibit that certainly engaged the visitors was the ‘Francis Superior SS500’ alleged to have been discovered in the late 1990s in the back of a leaky old farm building just outside Nottingham, complete with a GB rolled-up white cap in one of the toolboxes!

Every kind of bike club was there, from the Italian Motorcycle Owners’ Club GB and the British Two Stroke Club Ltd to the AMC Hybrids Association and even the Adler to Zundapp German Motorrad, a section of the VMCC dealing exclusively with the German motorcycles from many now half-forgotten manufacturers of the postwar period.

On display on the latter’s stand were a 1954, 64 degree 350cc V-twin Victoria Bergmeister (with amazing likeness to the Japanese Lilac); a beautiful 250cc Adler two-stroke twin; an MZ two-stroke flat twin and a 200cc Zundapp Trophy two-stroke single.

In the early 1960s our roads seemed to be awash with the big Zundapp flat-twin sidecar outfits with their pressed-steel front forks, but this writer hasn’t seen one for years. What happened to them all?

The Panther club stand was notable for the sheer enthusiasm of its members, many of whom had ridden their big Phelon & Moore slopers, 350cc singles and two-stroke twins many miles to get to the event. It wasn’t all spit and polish either, for there was an everyday look to several of the machines. Andrew Cantrell’s 600, nicknamed the ‘Panda’, even boasted Honda front forks and a Japanese back end!

Joining the fun straight from an arena demonstration on her 350cc Panther classic trials outfit was Jennie Strawford, who won the Beamish Trial and was best in class at the Northern Trial at Wigton, Cumbria, this year.

The 2014 Founders Day Rally certainly lived up to its reputation as one of the best in the country.