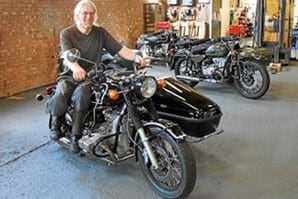 When I asked David Angel, proprietor of F2 Motorcycles why he moved from his well established Oxfordshire base, the reply was to the point: “Did you ever visit the old premises?” They were situated in a steel unit, cold in winter and hot in the summer, so when the opportunity arose to buy the bricks and mortar building in rural Cambridgeshire it was gladly seized. “We only rented there, here we own it and have loads more room as well.”

This extra space has allowed him to branch out from his specialty, Urals, into other markets including his own range of sidecars. These, along with a lot of sound sidecar advice, are on the bike shop’s own dedicated website (www.simplysidecars.co.uk) and are probably the cheapest way into sidecars there is. How about a new Jawa and a Dart for £5495 on the road?

He is also justifiably proud of the little cafe racer styled Skyteam Ace, a red framed lovely that looks all the world like a Honda CR110, well if you squint a bit! The rest of the Chinese made range includes Monkey and sand bikes as well as some more conventional machines. “They do seem to be put together really well,” said David, “I strip them a bit to give a thorough PDI and all the parts I remove seem well made.”

F2 is well known for delivering a ready fettled product and has a very loyal customer base. In business since 1998, when the bikes were ‘cheap and cheerful’ and unreliable, David’s taste for the quirky products of the old Soviet Bloc still shows.

As well as the new Skyteams he also imports and sells old school two-strokes in the shape of Jawa 350 twins. “They have some clever ignition that enables them to get through any current emissions tests; apart from that they are just the same as before.” They do now have an electric start, although they retain the combined kick-start and gearchange of the old bikes, oh and the automatic clutch!

David’s first love however is still the Ural and although the price has risen greatly recently the quality has improved in leaps and bounds. “The exchange rate is the problem; the bikes themselves have gone up far less in real terms in spite of all the improvements.”

As well as bikes, both solo and sidecar – not every Ural has to have a chair attached, F2 sells a small range of traditional clothing and accessories. You won’t find space-ranger leathers on the pegs but there is some fine quality branded kit, made in Austria rather surprisingly. Why not take a ride to Wisbech and visit a dealer just like they used to be. All things being equal I’ll get down there, a Ural outfit is just a Lotto win away.