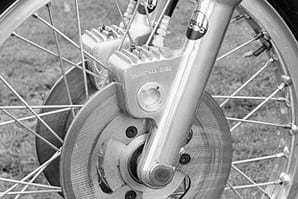 As power outputs and road speeds got ever higher the poor old drum brake struggled to cope. Yes there were multi-leading shoe versions for road and racing but once you got to four and eight leading ones they were tricky to set up, then once set up needed to be bedded in for a few hundred miles. The world was ready for change.

In 2012 it’s hard to understand that disc brakes were not heralded with universal cheer, but early ones were not always as good as the drums they superseded. Luckily people like Paul Dunstall could look at the problems and work out where things ought to be altered or improved.

Dunstall’s involvement with the ‘new fangled discs’ came from his racing needs and as he mainly raced Nortons his early kits were for that make.

Something else that set his kits above others was the way they actually looked. Instead of just bolting a carrier on to the existing fork leg, Dunstall took the overall aesthetic into account and even if they were only as good as the drum rather than far superior, they would have been worth it for the looks alone.