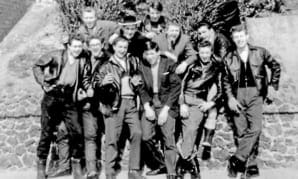 This is the story of two Peckham boys, John Bowden and Graham Cole, and their biking days in the 1950s and 60s, and I’m writing it because of John’s sad and early death in April after a brave battle against illness.

Does anyone remember these likely lads?
The likely lads in their prime! John Bowden is fourth from left on the front row, with Graham Cole leaning on his shoulder from behind.
I gave my eulogy at his funeral service, and the accompanying group photograph, which was printed in the order of service, created a lot of interest.

I was asked by his family if I could find out the names of any of the lads in the picture, which was taken more than half a century ago, and I cannot remember them.

It’s the only photo of John that I have from the early days, and he’s on the front row, fourth from the left, with me behind him leaning on his shoulder.

Also attached is a photo of myself leaning from a sidecar outfit on the first left-hander at Brands Hatch, with Mick Rodgers driving.

We were members of the 55 Club, and in October 1962 went with the club to the Bob McIntyre Memorial Meeting at Oulton Park with the 55 shield attached to the radiator grille at the front of the coach – not the best decision because the engine overheated and a replacement coach had to be found!

John lived in Alpha Street, off Rye Lane, Peckham. Alpha Street was behind what was then the Tower Cinema. John became a master butcher before training as a crane driver.

I lived at 125 Kirkwood Road, off Nunhead, and worked in Leadenhall Street in London.

My first ride on a motorbike was in 1957, when I was 15. It was my cousin’s BSA Bantam, and to his horror (and my terror) I performed a number of unintentional wheelies, but managed to cling on and return the bike in one piece to Bertie. I was somewhat shaken, and couldn’t imagine why anyone would want a more powerful machine!

As soon as I reached the age of 16 I bought my first bike – a 200cc Triumph Tiger Cub, and passed my test first time, although with hindsight I’m not sure whether that qualified me to cope with my next machine – a beautiful 1957 Norton Dominator 99.

I soon converted it to a cafe racer with clip-ons, alloy guards, set-back gear and brake pedals etc and some amateur tuning including a bigger jet, polished ports and different silencers (ill-named!).

I was only tinkering, but it was fairly quick.

Our favourite haunt was Johnson’s Café on the A20, where we would leave our coffee to ride past Johnson’s and the crowd of bikers, changing from third to fourth and reaching the ton as we passed.

Incidentally, does anyone remember Ivor, who sometimes followed us on his Goldie to confirm that we actually achieved that magical speed?

Another favoured venue was Anne’s Pantry at Biggin Hill.

The riding was different, but perhaps more challenging with its narrow, twisting lanes. We had great fun in Anne’s and at the dances we attended in the village, but looking back, I wonder whether we were actually wanted at the village hall!

We covered thousands of miles throughout Kent, but the best challenge was to ride along the Sidcup bypass to the end and take the right- and left-handers under the bridge at 90mph.

It wasn’t all about bikes, just nearly so. John’s relatives had an interest in the Seasalter Oyster Fishery near Whitstable. John and I were invited to stay with the family one Friday evening to go out on the fishing boat at dawn the next morning to help with the catch.

It didn’t go quite to plan as the Friday evening was spent in the local playing darts, chatting and sinking pints.

You can imagine that we weren’t in the best shape when we were called at 5am, but we went on board and slept on deck for the entire trip!

That would have been fine if it hadn’t been a very sunny summer’s day, so we were redder than lobsters with sunburn and embarrassment!

Whitstable was a regular run, and might awaken some memories.

There are many more memories from those very best of times, and perhaps there might be some ton-up boys out there who remember us and can put a name to a face or two in the photograph.

In any event, I’d love to hear from bikers from that era with similar memories.

So would we, Graham, and thank you for such a lovely letter. They were indeed the best of times, and I wonder how many of us of a particular age realised just how lucky we were to live through them? – Ed.