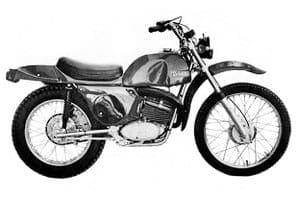 In this ISDT centenary year we’re naturally making a big thing of the ISDT and off-road legend Sammy Miller is bringing along an unusual bike – a 1975 ISDT Rickman Zundapp. This incredible 125cc machine has done 12 miles in total since it was bought new in 1972. It will be up on the stage area for all to see. Though he doesn’t know it yet… though will by the time he reads this… we’re going to get Sammy to talk us through the bike and try and entice some tales out about his own enduro career in ISDT.

Sammy also told us from the same source as the Zundapp came an unused, never started 1966 Cotton trials bike. How on earth it has survived in such an original state is beyond us as off-road bikes were generally used and abused from the off! Actually look out for the detailed ‘original and unrestored’ feature on this bike in our sister publication Classic Dirtbike.

We’ve also some very special ISDT bikes coming along and some surprises in the way of guests… if the weather doesn’t scupper us.