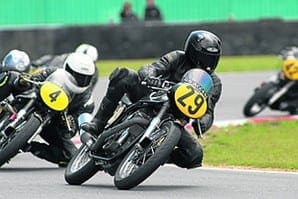 The series, for original specification Period 1 (up to 1964), Group 1 GP machines, will be run on Avon control 19in tyres and the Lansdowne organisers expect this should make this series even more competitive.

BBHGP will run concurrently with the long running Lansdowne Cup Championship, now called the ‘WRR Lansdowne Cup’ in memory of Roy Richards. For 2012 the series has four sponsors, The National Motorcycle Museum, Bonhams the auctioneers, The Classic Motorcycle magazine, and Avon tyres.

As in past years, the Lansdowne Classic Series may well be part of a high profile car and bike race meeting run at a major circuit as well. More information from lansdowneclassicseries or Richard Adams on 01789 763153 or Gordon Russell on 01789 740866.