OBM dropped through the letterbox this morning, and I quickly became absorbed in the Great War tribute article – finding the photos fascinating.

The two centre right photos on page 37 are of unidentified bikes – the top one being a Royal Enfield 2 3/4hp twin with Motosacoche engine – unmistakable by the cylinder finning being parallel with the ground.

I recently read Martin and Nick Shelley’s excellent Two Wheels To War, where it was mentioned that in the early stages of the war, guys were so desperate to volunteer as dispatch riders, that they went out and bought a new bike with their own money to go to war!

The little Enfield looks to fit into that category, as it is very clean, almost new condition, with a 1914 specification. Interestingly, the standard in-built handlebar lever throttle controls on the right-hand side have been abandoned for a clamp-on Bowden/B&B type on the left, which would give MUCH easier access to the cables/ carb slides (having just re-cabled the built-in type, I can understand the thought process behind the mod)! 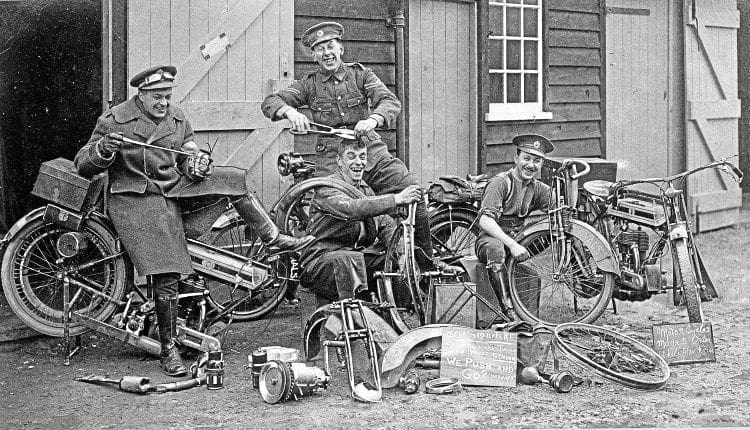 The photo immediately below, of the ‘gunship’, appears to be another Enfield (E16), but the larger 6hp version, identifiable by the twin fork spring and handle start just visible above Tommy’s left shoulder.

A number of manufacturers supplied motorcycle gun combinations during the war, Enfield, Scott, Matchless and Clyno being the main companies.

I can’t make out whether the dispatch rider having his hair trimmed with tin snips on page 36 was trying to dismantle or correct the severely buckled rim – plenty of bent forks around as well!

The guys’ ‘fettling’ engines also brought to mind the correct height for using a vice, with different thickness boarding to stand on, depending on whether you were a shortie, or none at all for longshanks in the foreground.

Read more Letters, Opinion, News and Views in the December 2018 issue of OBM – on sale now!