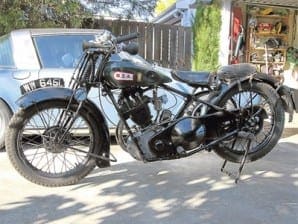 Then, over a few weeks in the early Seventies, it was assembled to running order in my grandfather’s garage.

One of my earliest memories is of it being started, then run up a hill. I remember that the clutch was slipping, so it only went a dozen yards. Then it was left until the Nineties. For a number of years I would play on the bike, when we visited my grandfather, until I grew too old for it, and it was then was stored under some shelving.

During my time in the Army in the early/mid-Nineties my father did a quick paint job and got it road legal. I could not ride it because my parents were against me getting a licence for fear I would kill myself, (they were probably right given the crashes I had on a bicycle). So, the only ride I had after many years of dreaming was a 40 minute pillion ride in a frozen North Yorkshire. Shortly after that it began to misbehave and I suggested a magneto rewind would help. By the time this was done I was living in New Zealand.

Being 12,000 miles away meant I could get a motorcycle licence on the quiet, with the sole aim of being able to ride the BSA. I was so focused on this that I sold my learner bike the day I passed the final test. Once I told my parents of the licence, I suggested that since the BSA was hardly ridden, then I would be a better owner. I was pleasantly surprised when it was given to me as 40th birthday present and shipping was duly arranged.

It took me 10 months to fully restore, this being my first restoration, but I hope I was thorough enough, replacing all bearings, bushes and wearing surfaces. I even had a tool cast to my wax pattern for the clutch centre. The brakes were fully sorted with re-metalled drums and careful adjustment of shoes so they went in square for the first time ever.

So it was in 2006 that I finally got to ride it for the first time, it even started third kick. However, some elderly neighbours taught me the correct, stress free way to start it using swing and throttle.

In 2007 my parents visited New Zealand so I rolled out the Beeza and a Douglas and for the first time father and son could ride together, something he thought would never happen. I now ride it at least monthly and even use it for casual transport to town.

I hope you can imagine how distraught I was when a local respected engineering company destroyed the right crankcase while welding a crack. The company suggested either casting a new one for about £1800 or I try to get a used one. With a £4 advert in OBM I have had nearly a dozen replies from as far as Italy and Spain. So thanks to the generous readers of OBM it’s now on the road again and ready for more adventures.