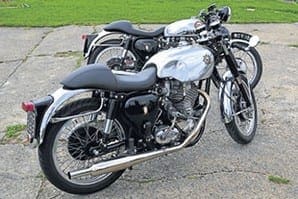 Their achievement was even more remarkable because of the two bikes they chose to do the run on – BSA’s Gold Star Clubman models. Of the many achievements laid at the wheels of the Clubman Goldie, touring isn’t normally the first one that springs to mind.

Anyway, the two bikes Dave and Keith rode performed faultlessly, sipped fuel, giving 60mpg, and wasted ne’er a drop of oil. Yes, that’s right, a pair of British singles, thundering their way along the approximately 1100 miles – the route wasn’t as direct as traditional End to End runs are – from one end of the UK to the other were as clean as a whistle at the finish.

During the run the lads paid a visit to Jean Baine at Bedale in North Yorks. It was Jean’s husband Mick’s passing away that was the inspiration for the run.

The bikes
Gearing on Clubman Goldies has been the subject of folklore for many a year with awe inspiring tales of 70mph in first gear. However, these bikes were on slightly more flexible gearing with a Daytona cluster fitted into the boxes. These gear clusters are not common but the spec is fairly well known and a full set of ratios were made by a firm in Kent – R + N Engineering 01474 823771 – for both bikes.

We’ve mentioned the frugality of the fuel useage and the fact the bikes remained oil tight. Well done lads and thanks to all who supported you.