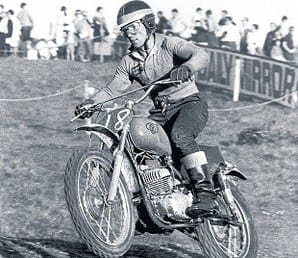 Speaking to OBM, organiser Adrian Moss said: “We’ve got Dave Jeremiah as special guest this year and Mick Andrews is going to do the trial and the scramble too. Oh, you’d better mention that the road trial will be the second round of the Rickman Motorcycles British Bike Championship.”

Just in case you weren’t aware, the British Bike Bonanza has two trials running during the day – the first is the main event and includes a lap of Sallywood Park then heads out on the road for a lap of the surrounding countryside as per a traditional trial. The second trial is several laps of the Sallywood Park course. All in all it provides quite a spectacle and opens the way for the Saturday evening grass track. At one time grass track was the way for club riders to go racing and every sporting club would have a patch of ground where they could lay out an oval.

Sunday, July 1 will feature the main event and be hosted, if that’s the correct word by special guest Dave Jeremiah. The Welshman is no stranger to the Bonanza having raced there in recent years and certainly he’s no stranger to the off-road world. For many years, alongside his scrambling and trails riding, ‘Dai’ was the mainstay of the British ISDT scene. Jawa and KTM mounted the Welshman earned many a gold medal.

The Bonanza also features something new for 2012 – a Past racers Demo Parade where for an entry fee of £20 to cover insurance, those racers who feel age is against them can still ride on the famous track. Contact Adrian Moss on 01453 758026 for more details.