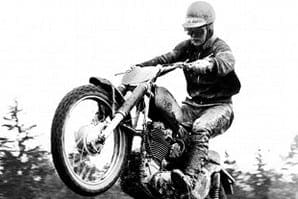 He achieved this distinction in his own way by converting an AJS 7R road racer to off-road trim and dominating. His rise began when he was selected to represent Sweden as part of the MXdNations team in 1954. The individual winner of the event, his efforts also placed the Swedish team second. Nilsson was deemed a hard rider but his contemporaries trusted him.

Latterly he became involved in restoring classics and his work provided Scandinavian enthusiasts with many a stunning machine.