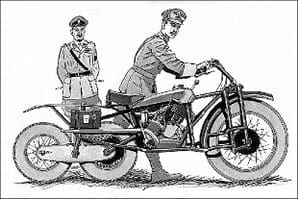 No matter what modern riders think, it has all been done before and while it is amusing to laugh at old motorcycles and deride them from the 21st century, drawings like this one show people who were in the industry in the 1920s could think ‘outside the box.’

When the military wanted a go-anywhere-crosscountry machine, OEC – Osborn Engineering Company – rose to the challenge and produced this Blackburn engined twin rear wheeled contraption. It apparently wasn’t a total success and the handling was reported as being ‘odd’.

The small batch made did eventually sell though not to the military but an oil company who reckoned fitting the wheels with a caterpillar track would make the bike ideal for soft sand and marsh conditions. This concept hung around for a while – take a look at modern snowmobiles and skidoos to see why we say that.