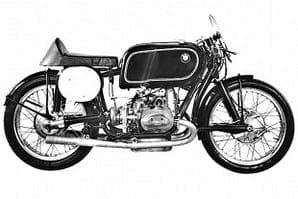 Pre-Second World War the stunning supercharged BMWs had wowed the world but FIM regs forbade forced induction so BMW alternated between fuel injection and carburettors on its works machines. This development led, in October 1953, to a production racer launched at the Frankfurt Show. Named the RS54 – for Rennsport 1954 – it was a close replica of the machines Walter Zeller raced for the factory. So close in fact, they cost almost as much to build.

The basis of the engine was a dohc 500 boxer twin engine unit with four gears in the transmission. This was slotted into a rolling chassis with swinging arm rear suspension and, on the show model, telescopic front forks. These were supposedly borrowed from the works bikes and didn’t make it to production bikes which, instead, wore the familiar Earles fork front end.

With 45bhp at the rear wheel, a weight of 291lb the RS54 had a top speed of 126mph and hauling this machine to a stop was achieved by 200mm diameter 2ls drum brakes.

Why can’t you ride one?
It should be more ‘it’s unlikely you can ride one’ rather than can’t. Press reports showed BMW was considering producing between 30 and 50 of these race machines – actual production figures seem to suggest 25 or fewer. There were more but they headed for the sidecar scene. Indeed the fate of some solos was to be converted to sidecar duty.