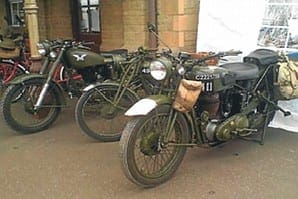 Two-wheeled transport will be integral to the event at South Cerney Airfield, Cirencester from August 2 to 4.

The show, now in its 39th year, has grown dramatically in recent years and is now widely regarded as one of the biggest and best steam, vintage and countryside events in the UK, with more than 15,000 visitors expected through the gates. It attracts thousands of exhibits from all corners of the British Isles, as well as some from further afield.

The show was originally conceived for steam enthusiasts, but the range of exhibits has grown year on year. It now boasts a huge array of vintage transport, from classic motorcycles to buses and coaches, commercial vehicles, classic cars through to military vehicles, tractors, engines and historic caravans. A live action arena will be an integral part of the show with interactive demonstrations taking place every day.

There will also be a fun fair, including vintage rides.

Martyn Slater, chairman of the Stroud Vintage Transport and Engine Club, said: “The extravaganza is the biggest of its kind run entirely by volunteers and I am proud to be involved. As well as raising money for local and national charities, our aim is to provide a safe and happy environment for everyone to celebrate our unique transport history, in hope that we can inspire future generations to get involved in the preservation of historic vehicles.”

A free vintage bus service will be operating around the perimeter of the show site, and to and from Kemble railway station throughout the show to connect with selected First Great Western Trains.