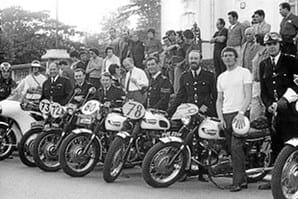 In this case, speaking with Bill Emmerson C of C at the pre 65 Scottish there was mention of the Circuit Pyrenees, a road trial generally restricted to the police forces. Bill had done very well in it one year – modesty prevents from saying ‘winner’ – then this picture turned up of the 1970 team at the finish. Smiles also indicate ‘a good result’ but there were no names. I recognised one or two people but pitched it over to Bill and got him to stir the grey cells a bit.

Bill says: “I know the majority of these riders from the Circuit des Pyrenee which was probably the last of the open road speed events similar to the original Giro d’Italia – not the present set-up which is a pootle around compared to the original.

“The ‘C de P’ was classed as a time trial with a number of special tests which varied in length and location from year to year. How the organisers got away with it I’ll never know.

“The tests were of the fastest man sets standard time in each class with one test on a given time, all on closed roads.”

Thanks Bill, any of you still alive and kicking?