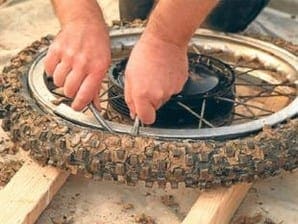 They were designed to take workers to work – I’ll allow that some motorcycles were, and still are, glamorous and eyecatching but they’re still transport and it’s our rose tinted view of the past that has altered that perception.

It is also true that the more glamorous machines – Bonnevilles, Goldies, HRDs, Broughs etc – have survived because they were high value when new and have remained so, apart from a small hiccup in the 60s when adverts reading ‘Vincent v-twin, tappets noisy, £20 ono’ were not unknown.

So, imagine the fate of such machines as this 1924 225cc Model A Royal Enfield in retired speedway ace Eric Boocock’s workshop. A smart enough machine to look at, though Eric isn’t enamoured with the green panels: “That’s the colour they were, well as near as we could find. The lad who does my painting, Les Carrol, had a swatch of greens with about 50 close to this colour and this was closest.”

This attention to detail seems to come naturally to Eric and was a major feature of his speedway career. “I never once turned out with a dirty bike or leathers for a meeting, after the first race everything was covered in muck but at the start it was all clean,” he says.

“I just seem to work better that way and it’s the same with this little bike, it was a £23 ride-to-work thing that even in the 1930s wouldn’t be expensive.

“I’ve tried to reuse as many bits as possible in the rebuild, I spent ages with the wire brush and bench grinder, getting rid of rust on fasteners then having parts bright zinc’d.”

He adds that those fasteners he couldn’t save were replaced with stainless steel as was the front pipe of the exhaust system. “It was too far gone to save so a friend of mine bent up some stainless steel tube to the right profile and the original silencer fitted back on once it had been plated.”

The bike came Eric’s way by a quirk of fate and had been lying in a shed near where he used to live for about 15 years.

“The lad wanted a retirement project, so bought this in around 1970, took it apart and laid it up in the garage while he built a house and garage, then extended the garage and finally decided he wasn’t going to get it done. He told me that as far as he knew it was all there.”

Eric raised an eyebrow as he related this part of the tale. But it turns out that the majority of the bike was actually there and those bits missing were not a major problem at all. What was a problem, or caused a headache or two until he got his head round the way they worked, were the pressed steel front forks.

“I could not figure out how they worked. One of the link bolts is right hand thread, the other left hand and if they don’t go together properly the whole fork spreads. Once I figured it out it was easy but there were a lot of ‘technical terms’ being uttered during this time.”

Of the few parts missing, a serviceable head lamp, caused a bit of hassle to find, eventually though one the right shape did turn up, still in its box, at an autojumble. It needed the ammeter and switch gear holes filling in then painting but now it’s spot on.

There was no such luck with the panel in the petrol tank where the switch gear actually goes. There was no alternative but to get a piece of thin steel and create one by beating a lip around the edge. “I got some wrinkle finish paint from Richard Thorpe at PJ1, his last tin as it turns out, and it looks okay I think.”

The rest of the restoration went reasonably smoothly as the boxes of bits contained enough parts to build a serviceable gearbox and with new bearings and bushes inside it works well. The engine too was reasonably straight forward. “It’s got huge phosphor bronze bushes as main bearings,” says Eric, “and these were okay, as was the needle roller big end. There was a bit of hassle with piston rings, though John Harding turned up some the right diameter and thickness, all I had to do was make the cut-outs for the pegs in the piston.”

Unlike four strokes, two stroke piston rings are fixed in place by locating pegs in the ring grooves. “It’s just as well the rings worked as the chances of finding a new deflector piston – the top of the piston is shaped to ‘deflect’ the incoming chage to the correct part of the head for ignition – would be slim, then finding someone who could bore the barrel might be even slimmer.”

The barrel and head are cast as one piece so conventional boring facilities can’t work.

With things stating to look better for the project Eric spent ages filling and rubbing before heading to the painter’s for the final coats to go on. “I’m right pleased with the finish,” he says. Eric was less pleased with the carburettor though. “It’s a needleless one,” he tells me, “and I couldn’t get the bike to run right with it. I knew it wasn’t the magdyno as Tony  Cooper fettled it and there’s a spark like it was running off the national grid,” he laughs. “At the moment though the carburettor is off my BSA. I’ll have another go with the original one but it would be better if I could find a new body and slide.”

What’s it run like?
Despite his misgivings about carburation the Model A fires up easily, settles to a tickover and engages gear easily. There wasn’t much of a chance to go for a long ride as we arrived pre-MoT and the bike wasn’t road legal. Luckily where Mr Boocock lives there is a long private stretch of road and, with our young photographer Melanie Pico at the ready, there was a chance to slip the hand change bike into second of the three speeds it has.

If a 500 yard ride can give an impression then the one I got was of a pleasant machine, well done Eric, and there was no hint of the bike wanting to drift into a sideways speedway slide as I turned into your place.