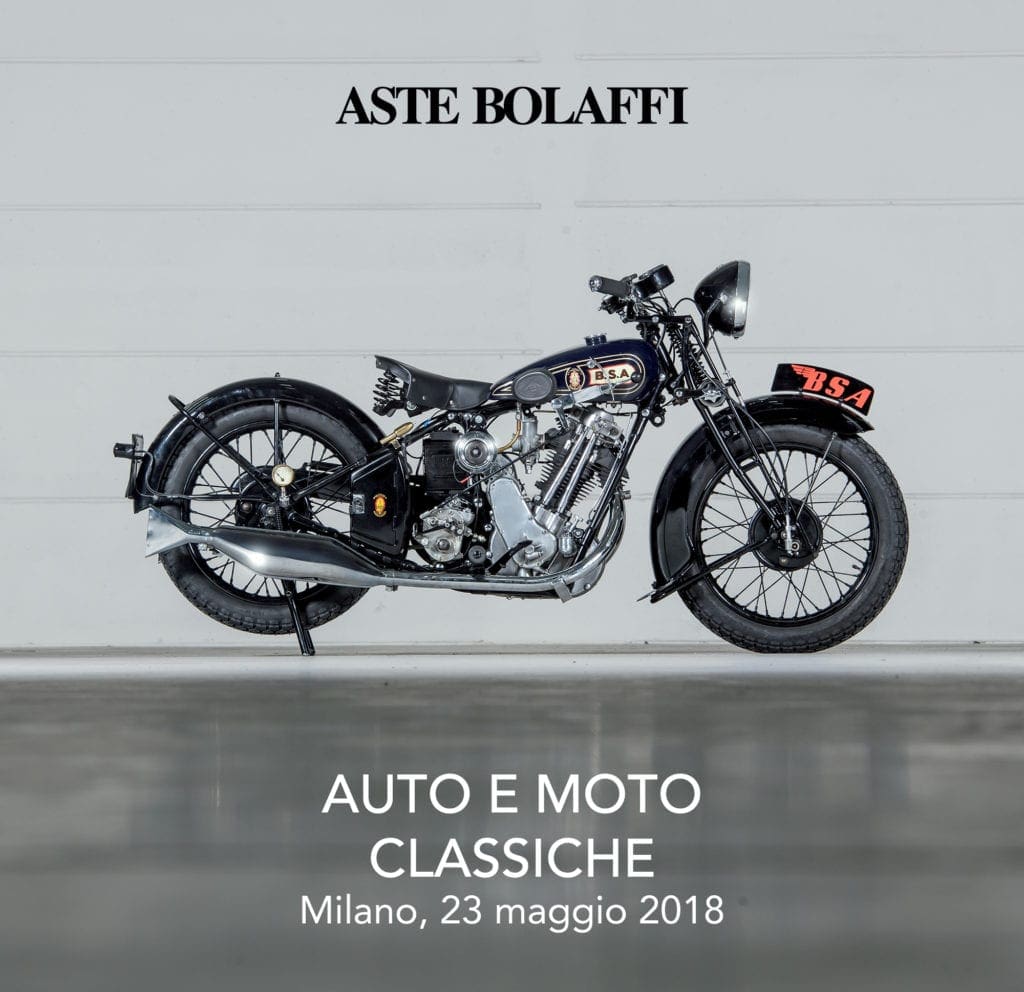 For its first Classic Cars and Motor Vehicles Auction, scheduled for May 23rd at “La Pista di Arese” (Milan), Aste Bolaffi will present some of the most iconic vintage cars, with models that range from the pre-war period to the youngtimer, together with motorcycles and unique pieces from Stile Bertone bankruptcy procedure, including various original designs, style models and the last two prototypes created by the historic coachbuilder, Alfa Romeo 8c Pandion 2010 and the Bertone Nuccio 2012.

All the vehicles included in the auction catalogue are perfectly preserved or carefully restored, and meet the very high quality standards that since 1890 make Bolaffi a landmark in the field of collectibles.

The selection of cars features around 60 models, with both interesting and iconic cars that are representative of the 20thand 21stcenturies. The top lot is a 1955 Lancia Aurelia B24S Spider, a highly sought-after model made famous by the film “Il Sorpasso” by Dino Risi.  This red model offered at auction was invited to participate in the 2014 Concorso d’eleganza di Villa d’Este (estimate € 900k-1.100k).

Among the highlights there is also a rare 1931 Isotta Fraschini 8BLandaulet Imperiale from Carrozzeria Castagna Milano, an important example of meticulous restoration (estimate € 700k-900k). An exquisite 1930 Alfa Romeo 6C 1750 Cabriolet Gangloff, a 1951 Lancia Aurelia B51 Berlina Pininfarina, a 1956 Alfa Romeo 1900 Super Primavera by Boano, a 1982 Ferrari BB 512i, a 1973 BMW 2002 Cabrioand a 1969 Maserati Quattroporte Frua are highly anticipated lots as well.

Porsche is strongly represented by a selection of 911s, including a 19702.2 S and a very valuable 1973 Carrera RS 2.7 originally sold in Italy to a private customer and recently professionally restored (estimate € 600k-800k).

A 1975 Alfa Romeo 1300 Spider will be part of the sale as well; it’s a unique custom-built car with personalized interiors thanks to the partnership between Garage Italiaand Fratelli Cozzi Alfa Garage. Among the supercars there is a 1998 Lamborghini Diablo VTauthenticated with the support of Automobili Lamborghini.

The racing motorcycles are also highly represented, with the presence, among others, of a Triumph Trident 750 “Koelliker”, part of the team that participated in the 1972 Bol d’Or as team Koelliker, a Norton Manxproduced in 1960 and in perfect condition, and an AMF Harley Davidson 250 RA.

«The selection of cars and motorcycles – explains Massimo Delbò, Aste Bolaffi expert – is based on very strict selection parameters. The goal is not to have only economically important lots, but above all to have the “right” pieces, which are perfectly preserved or meticulously restored and equally importantly are able to tell a great story».

In the catalogue there are also some rare lots from the Stile Bertone bankruptcy procedure, including two “show cars”: the Alfa Romeo 8C Pandion 2010 (estimate € 250k-350k) and the Bertone Nuccio 2012 (estimate € 300k-400k). The first was designed for Alfa Romeo’s 100thanniversary, and the second was the last prototype created by the historic coachbuilder, before its foreclosure, to celebrate Bertone’s 100thanniversary. To fully preserve their historic importance, both cars will be auctioned off in groupe with other artifacts which include projects, photographs, prizes won and, in the case of the Nuccio, the 1:1 scale 3D style model that was presented in Geneva in March 2012 will also be included. Some design drawings related to the history of the cars and their styles will also be offered for famous or even some then never-produced cars including: the Fiat X1/9 and  Ritmo Abarth, Jaguar Rainbow,Simca Shake Buggy, Ferrari 308 GT4, Porsche 911 Roadsterand Citroën BX. To complete the section there will be some style models in 1:4 and 1:10 scale of some of the prototypes of the coachbuilder, such as the Lamborghini Athon, or models which later entered into production like the  Lamborghini Urracoand Fiat Dino Coupé.

The auction will take place on May 23rd during the week between the conclusion of the Mille Miglia Storicaand the beginning of the Concorso d’eleganza di Villa d’Este, the two most important Italian events for  historical motor vehicles.

The cars, motorcycles, automobile-related objects and the auction itself will be presented in the building designed by architect Michele De Lucchi, which stands alongside the original Alfa Romeo test track in Arese, just outside of Milan.  In addition to the “static” car show, there will also be an exhibition – a world first in the auction world – where attendees will be able to witness some of the cars up for auction in action on the 1.5 km racetrack of the famouscar manufacturer, considered one of the symbols of the former factory.

Managed by Tommaso Marchiaro, with the contribution of Ezio Chiantello, the department is coordinated by Massimo Delbò and benefits from the scientific expertise  of Antonio Ghini.  It’s strength lies in the strict selection standards of the individual lots made by a group of highly qualified specialists in the automotive and motorcycle fields.

Since 1890 the Bolaffi Group has turned its passion for the objects that have written history into its business. Stamps, antique coins and books, posters, art and designs objects recount the journey of man transforming them into witnesses that one loves collecting. Motor vehicles also fit squarely into the fascinating world of collecting and the company has decided, through its subsidiary Aste Bolaffi, to welcome them among its areas of expertise, dedicating them the same care, attention and professionalism that have always characterized Bolaffi. With this first auction dedicated to the motor industry, Aste Bolaffi combines its distinguished and appreciated activities in the field of collecting rare and valuable objects with the commitment to offer to enthusiasts of the motor industry history prestigious vehicles, which are able to combine passion and value.