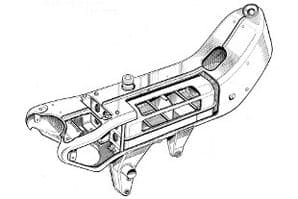 Looking at the British motorcycle industry 40 years from its demise the casual observer could be forgiven for thinking there was a complete lack of imagination throughout its life. This would be wrong – there were many far thinking designers and engineers within the factories but, as with all industries, they had to temper imagination with commercial realisation.

With engineering still in its infancy, the majority of enterprises would use the readily available skills of blacksmith technology. It was relatively easy for even a basic workshop to cast lugs and braze tubes into them for frame making. This suited large volume manufacturers as major redesigns could easily slot into production. There were those that felt this needn’t always be the case and new ideas were about.

A brave one was the use of light, pressed steel fabrications such as the car industry was using and the Ariel company embraced this technology with the Leader and Arrow. The design team, led by Val Page, looked at the whole motorcycle concept and produced a machine that met the brief and provided a degree of rider protection not seen again until the 1970s. With a basic beam frame, compartmentalised and bracketed to hang various necessary components on the Leader was futuristic, comfortable and light. It also was too futuristic for its own good, sadly the concept didn’t sell at all well. A shame really – with later manufacturers using similar concepts successfully – perhaps Ariel was too far ahead of its time.