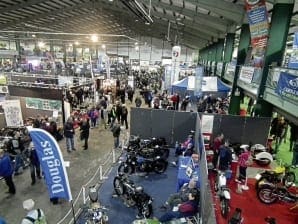 Visitors flocked to the 36th Carole Nash International Classic MotorCycle Show at Stafford on April 23-24 to make it one of the best yet, with exhibits of the highest quality, another record-breaking Bonhams’ motorcycle sale, hundreds of club and trade stands inside and outside the halls, star guests, special displays and so much more.

Another record-breaking weekend at Stafford
Looking down on another top show at Stafford on Saturday, April 23, with the Douglas display prominent in the foreground.
It’s one of the greatest bike shows on earth, with so much to see and experience that the whole weekend, let alone a single day, is never quite enough.

Such was the standard of machines and club stands that the judges had one of the most difficult tasks to date, writes Pete Kelly, but in the end it was Sean Kelly’s Sunbeam Model 90 that took the honour of Best in Show, while the DOT Motorcycle Club’s imaginative display earned it the best club stand award.