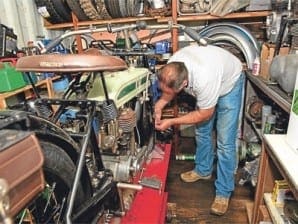 It’s 50 years this month since the government of the day, worried about the mechanical condition of vehicles on the public highways, introduced an annual test for all vehicles over 10 years old. Things like brakes, tyre condition, bearings and suspension were the main focus for the Ministry Man’s attention back then and, on this golden anniversary of the test, OBM wondered what had changed during the intervening 50 years.

The answer is, surprisingly little, steering, suspension, brakes, bearings and tyres are still important to the test.

As the VMCC’s Triumph SD was residing at OBM Towers and in need of the MoT, before heading to Cumbria for the Nostalgia Week, where it would see action in the ISDT Run, it was an ideal opportunity to run through the 2010 test and take a photographer along too.

In the old motorcycle world there are all sorts of folklore tales about ‘tough’ tests and ‘easy’ tests and that’s exactly what these tales are – folklore. They may well have come about because some testing stations are more used to dealing with ancient motorcycles than others but the test is the same no matter what or where the station is.

There are a number of things you can do to ensure your test is ‘easy,’ for instance you could make sure your motorcycle is clean for a start. After all, you don’t like working on a grubby bike so why should the MoT man?

Just before the test I went round the bike with a spanner and found the steering head had slackened off, quite a way actually, this would have been picked up on the test and meant a failure. Without the test I might happily have ridden until it broke and I’d have been off…

If you think your bike is fine before going along to the test, ask a mate to have a look at it. Why? He or she won’t be quite so blind to the things you may class as ‘foibles’ but are actually faults but will only take a few moments to adjust. You won’t get that time at the test, do it before. Some MoT stations will be quite flexible about appointments and often advertise the fact an appointment isn’t needed. In this case as we wanted to take some photographs so we booked. If you do book then turn up a little before the appointed time, it’s more polite if you’re waiting for them than the other way round.

So, with the bike in the van, we arrived at Clarkes in Horncastle, which is just up the road from OBM’s office and is where the B40 and 650 Triumph that I own are tested. I’d brought the documentation along – last MoT, V5C and insurance document – so, with the V5C to hand all Tester Paul Martin had to do was type in the serial number to the computer and there, on the database, was one Triumph SD 550cc motorcycle. After that the test went very smoothly.

There’s not a lot of things to test on a vintage machine but an experienced mechanic will be able to tell if your bike is safe. There was some amusement when the editor got the balance of the twin barrelled carburettor levers slightly wrong and had to kick and kick… and kick, take a breather, readjust then kick again when it started first swing. Everything else was fine and Paul signed the pass form making us legally entitled to use the public highway for another year. MoT? Piece of cake!