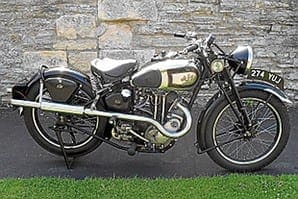 The AJS star touched a foot down only once in six days in an observed section – on Grey Mare’s Ridge, high above the aluminium-smelting town of Kinlochleven.

The trials world clamoured for replicas of this superb AJS. After all, a bike that could win the Scottish was going to make a superstar out of everyone. Well, actually, no.

Jackson’s bike was rather special, as befits a works machine; though outwardly similar to the production bike, there were considerable differences. It was a short-stroke motor for a start, which went against all the accepted practices of the day, but it suited Gordon.

The engine had been moved back in the engine plates, the frame was made from lightweight tubing and the wheel rims were light alloy.

A whole raft of other mods were done and ‘GLJ’ felt he’d won the trial before the event had started.

Why can’t you ride it? There’s only the one; AJS never built replicas, assuming that few buyers would take to the bike as well as Gordon. Even his fellow team members questioned how he could ride it.