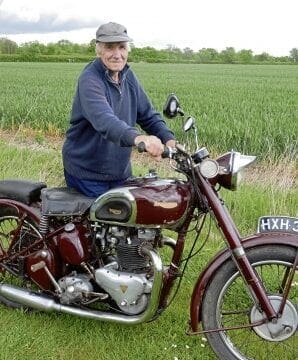 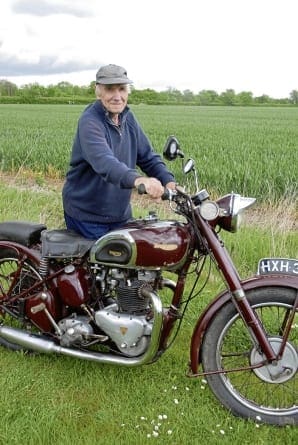 When Bernard Ratcliffe saw our front cover archive picture of the line-up of police Triumph Speed Twins last month, particularly the HXH 319 registration of the machine nearest the camera, he was amazed to see that it was only a few numbers removed from that on his own ex-police Triumph, HXH 304.

He bought the solid rear-end 1946 Triumph from P&C Motors in Colchester, who used to take in batches of ex-Met police bikes, in 1954.

It cost him 99 guineas, and as his weekly wages as an agricultural worker in the quiet, unspoiled corner of Essex where he still lives were just £4, he traded in his 1946 3T as the deposit.

Sixty-one years later Bernard, who’s now approaching the age of 82, remains as proud of the maroon parallel twin as he was on the day he first rode it home – and it still starts first kick with the slightest of pressure on the kick-start pedal.

In their younger days, he and his late wife Glad, who sadly passed away last year, were keen supporters of scrambling and speedway, particularly Ipswich, and went everywhere on the Triumph.

When they started a family, he first fitted a Watsonian Avon sidecar and then a roomier child/adult sidecar from a friend in 1960.