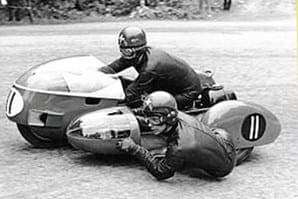 The same hall had a nice collection of trials sidecar outfits and a rather lovely Russian two-stroke with original chair that the editor hopes to get a ride on in the near future. Ridden in sidecars were very thin on the ground, although the event did clash with Watsonian’s open day, so this might have affected things. One that was there, however, was a lovely Earls forked BMW with a period Wessex sidecar.

These are interesting insofar as they were advertised in the late 1950s as the ‘Chassisless Sidecar’. They were built with a steel monocoque centre portion with two identical glass fibre nose and tail mouldings. This one made quite a change from the rather more common, on BMWs, the Steib or GP chairs. Parked just behind this was the Russian version, a Ural but in LHD form, and the badge made a nice foil to the genuine BMs – being similar but with red and white quarters.

Nearly all the other outfits were sporting, but one machine in the George Stevenson Hall really caught my eye. It was the ‘Peckham Pouncer’, a Reliant powered trike with an Only Fools and Horses theme. Okay, it’s not a sidecar but I feel that it is certainly in the spirit of outfits and it made me smile, for that alone it would have got my vote as Best in Show. At least it was used, unlike so many of the exhibits.

From one water-cooled all alloy engine to another… okay, there may be years of development between them but are they really that different? Some of the exhibits in the Race Sidecar Paddock showed just how much development has gone into frame manufacture in recent times. At one extreme was Shealagh Neal’s British Historic Racing BSA, at the other end of the extreme a carbon fibre monocoque framed modern kneeler.

Pride of place among the moderns, however, was the Norton Rotary powered sidecar of Rust Racing. This is still occasionally campaigned by Colin Rust although as he said: “Spares are getting more scarce and we have to search all over for them.” This means that it may just be paraded in future. The chassis appears quite long and although I forgot to ask, I think is a Windle and the bodywork is finished in a tribute to the racing Norton’s of yesteryear. Another Best in Show?

All in all it was a good show. Who knows, for next year what about a Bit on the Side stand? Let’s show them just how many outfits are still in use!