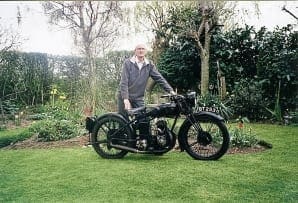 Harold Prosser with his 250cc Velocette GTP, which at 86 years old this year is exactly the same age as Harold. He hopes the bike will continue to be enjoyed by his son and grandson.

The term ‘oily rag’ is used a lot to describe old machines that are unrestored. As the accompanying photo shows, mine is one of them, and I hope its history will interest OBM readers.

In the late 1920s, my father was working in a garage belonging to Yorkshire Amalgamated Products Ltd, a sand and gravel company.

In 1930 three new Velocette GTPs were bought for their salesmen. One was damaged and lay in a corner for some time, and the other two were replaced by cars.

In 1936 father bought the Velo for £1, but after being repaired it was unused until 1942. My father then began working for a construction company driving a steam roller.

Work started on a new bomber station and he used the Velo every day until the job was finished, and until the end of the war it also took him to other airfields in Lincolnshire.

I was born in May 1930, so in July we’ll both be 86. I have a son and grandson who are both motorcyclists, and their present interest is riding modern endure machines, but I hope that, in time, they’ll put the Velocette back on the road.

It’s still good for many more miles, and as it was never fitted with a speedometer, we’ll never know what it has done in that regard.