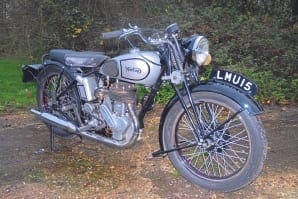 Bikes from that era weren’t bedecked like Christmas trees with plastic and glass-fibre appendages, nor were they fitted with mirrors, indicators, electric starters, automatic chokes and the like.

You pulled the machine on to its rear stand, turned on the fuel, tickled the carburettor, moved the advance/retard lever to just the right spot, eased over the engine on compression, gave a hefty prod on the kick-starter and off it went.

One machine that always oozed such purity of form was Norton’s trusty 500cc 16H side-valve single, a prewar favourite that was equally happy being ridden solo or lugging a sidecar around. During the Second World War it was a military stalwart, and when peacetime resumed, it and the Model 18 were the first two Nortons to return to civilian production.

After receiving its final makeover with telescopic forks and other mods in 1947, the 16H was produced until the mid-1950s.

Around 12 years ago Terry, who runs Precision Motorcycle Paintwork, mentioned to a customer for whom he was painting a rare Indian Velocette tank that he was looking for a prewar Norton. The customer had a 1938 16H that had been stripped down and was all in bits, and a deal was made.

“When I finally got round to it, the first job was to do a ‘dry build’ to make sure that everything was there, and that it all fitted,” said Terry. After that, it was a matter of using his hard-won skills to put the engine together properly and thoroughly prepare the metalwork before applying a meticulous paint job.

He sandblasted all the parts, dealing with any imperfections along the way, before carefully moving on to the filler work and priming, then cutting back all the surfaces by wet-flatting and finally applying a lustrous black finish to all cycle parts, with the exception of the silver petrol and oil tanks.

The wheels, with their painstakingly applied red pin-striping on each side of the rims, are the result of many hours of work bringing the rims to a superb black finish before marking out the eighth-inch-wide strips with fine marker tape and embarking on all the steps leading to the application of the red paint.

The same meticulous care has gone into the tanks, which look gorgeous with their classic black and red lining.

No wonder Terry has been called upon to repair and paint the tanks of a Norton that took part in the very first TT in 1907, a Rudge, a Scott Flying Squirrel and a Vincent Rapide for starters. He showed me the petrol tank of a BSA Empire Star on which he’d spent countless hours cutting out, metal patching and generally knocking into shape before having it completely chrome-plated ready for the final painting of its tank panels in BSA light green.

“Generally the engine was great,” said Terry. “I had a spare crankshaft with a good big end, and T&L Engineering of Elstow, Beds, fitted a new small end bush to the connecting rod, as well as a new cylinder liner and bored it out to standard piston size.”

Merv Kendall of Dunstable overhauled the Lucas magneto and upgraded the dynamo to 12v, and a solid state regulator/rectifier was fitted for charging. Terry made up all his own cables, and a friend looked after the wiring.

When the great day came to start up the Norton after its long sojourn, it went first kick: Terry has the video to prove it!

Since then he’s been gradually extending his rides, with a bit more fettling in between, and it was at the Sand and Motorcycles event at the Leighton Buzzard Railway on September 28, that his Norton was spotted by round-the-coast Brough Superior SS80 rider John Wallis, who said it was one of the nicest he’d ever seen.