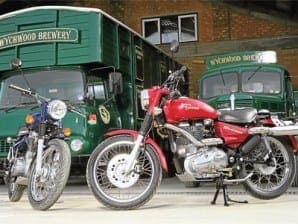 Thanks to a tie-in with the Indian company in the USA a whole dealership network became available to Royal Enfield. OK so the UK company had to repaint models and rename a few to suit North American tastes but it moved motorcycles and that was all to the good. The competition Bullet models had an excellent reputation in all sorts of sport but the 50s American market demanded something different – a dual purpose machine that could give its owner a lot of fun on and off-road.

This is the background to the Woodsman name applied to the current EFI variant that’s just joined the Royal Enfield range for 2010. With this latest powerplant, the company has a unit that will allow it to move forward and operate in the modern world.

Unlike the 50s Woodsman, the 2010 version makes little pretence at being an off-roader despite the high pipe and bars look. There’s enough of the off-road style to appeal to the likes of me though and the high bars make for a very manoeuvrable machine around town. It would be wrong to limit the Woodsman to just town riding as it’s a decent roadster and comfortable enough for much longer distances. I’d hazard a guess that while motorway riding is possible with this capable performer it would get boring very early on in the trip. Perhaps this is the motorcycle for the long way round or at least the back roads.

Whichever roads you do take then it won’t matter too much how remote they are as a full tank of fuel is going to get you approximately 200 miles. In this day of ridiculous fuel prices then this could well be the selling point or one of them that could tip you towards your local Royal Enfield dealership. It would be a shame if this was your only reason for looking at the Woodsman as it’s got many other qualities that offer a fun way to get about. If you’re a traditionalist then the kickstarter works well enough and, just for the fun of it, I did use it a couple of times during the test ride but the electric start is so reliable and fires the bike up very quickly that kickstarter could easily be an ornament.

On this particular model the footrest positioning has been moved further back, almost under the swinging arm pivot, which is fine for me and more in keeping with the trials bikes I’m used to riding though it’s possible that they may feel cramped to other riders. In practice though, other riders on our test day launch soon found the riding position to be fine, so, maybe when you try a Woodsman then you’ll find the same.

I suppose I’m making an assumption that you’re going to try one, maybe so but if you don’t then you’re missing out on a fun motorcycle that shows just how far the Royal Enfield marque has come from the early days of its reintroduction to the UK from India. Make no mistake about it, this motorcycle is more than just a nostalgia trip for us old bike enthusiasts, it’s a full on serious contender for the new rider – its power is below the limits for learners and it meets all the other requirements too I’m told. It’s also a contender for the commuter who wants something different, or just the rider who wants to tap into the Royal Enfield family as there’s a thriving scene of enthusiasts who love their Enfields.

Like the Royal Enfield motorcycle, the Oxfordshire brewery now called ‘Wychwood’ has had a varied career. Based in Witney, the Oxfordshire town famous for the three ‘B’s – bread, blankets and beer – the foundations for the Wychwood were laid in the 1840s when the Clinch family opened a brewery close to the present site. For 120 years it was a major part of Witney until the business was sold to Courage in the early 60s. Sadly the brewery was closed shortly after the takeover.

The site was dormant until the 80s when a German trained English brewer bought the site and set to producing beer on his own. The workforce doubled soon after – to two – and gradually got production to 800 barrels a year.

The name Wychwood – after the medieval forest that bordered Witney – was applied to the brewery in 1990. By 1997 the brewery was brewing 30,000 barrels a year including the flagship Hobgoblin beer.

I’d confirm after a decent ride out a bottle of Hobgoblin is a fine finale. Anyway, when the Brakspear brewery in Henley on Thames closed, Wychwood took up the mantle and acquired the ‘double-drop’ fermenting system that is well known among discerning ale drinkers. It also propelled the company up to the next level and 50,000 barrels a year.